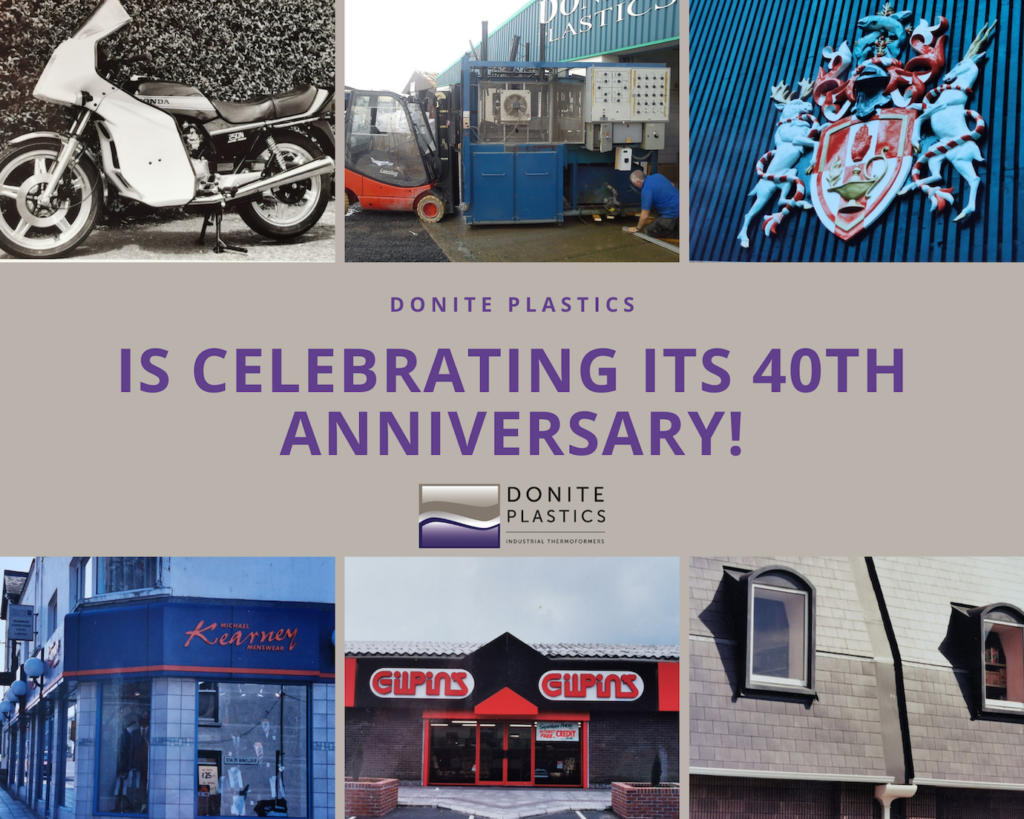 Today Donite Plastics is established as Ireland’s leading industrial thermoforming company, which services a range of sectors from aerospace to medical and just about everything in between.

However, if you had told 22-year-old Michael Knight, a motorbike fanatic who was working from a small space above his parents’ garage at the time, that four decades later, his business would become one of the country’s most successful companies, he probably wouldn’t have believed it.

We sat down with Michael recently to find out all about Donite Plastics’ somewhat humble beginnings, the lessons he’s learnt over the past 40 years and some of his proudest moments so far.

1). How did you come up with the idea for your business?

I was 22-years-old and working as a Mechanical Engineer for a company where I assisted in the development of a new type of heat pump. I have always had a great love for motorbikes – some might say an obsession – and in my spare time, I enjoyed working on motorbikes including my own, which was an old Honda 750 K2. On one particular occasion, I made a fairing for my motorbike which turned out really well and a few of my friends then began asking me if I could make fairings for their motorbikes. Then the company I had been working for closed down, and my best friend and I decided to try turning manufacturing motorbike fairings into a full-time business. His name was Richard Donaldson and when we put our two names together, Donite Plastics was born.

2). Can you remember the first project that you worked on? What was the product and what was it for?

Personally, the first project I ever worked on was the fairing I made for my motorbike which was a twin headlight version of a fairing that was made by Rickman in England. The first project we worked on as Donite Plastics was to design a product for the most popular motorbike at the time, which was the Honda 250 Superdream – I was in my element! We called the product ‘Columbia,’ because its lines were reminiscent of Nasa’s Columbia space shuttle.

3). How and why did you make the change from GRP based manufacturing to thermoforming and vacuum forming?

By 1990 we were making more and more special engineering covers and panels using the GRP process. There was one job in particular, that we had successfully designed and made prototypes for – it was a system for cleaning milk tanks, and it became evident that there would be a requirement for fairly large quantities of the production version. I soon appreciated that GRP was not the best process for this job, as a result I did some research and realised that the vacuum forming process was the perfect way forward. At that time there was no other company in Northern Ireland offering this process. I decided to test the water, and I bought an industrial vacuum forming machine from a company in Manchester that used it to mould suitcases.

4). As the first company in Northern Ireland to offer a vacuum forming service, how did other manufacturing companies react to it?

Most manufacturing companies didn’t really know what vacuum forming was and I soon discovered that very few knew that you could make large industrial parts using this process. Also, because we were making parts from ‘proper’ thermoplastic, not fibreglass, some companies assumed that the mould cost will be huge, when in fact, the cost isn’t much different to GRP. Vacuum forming has a big advantage over GRP in that you can produce approximately 20 parts an hour, as opposed to one or two parts per day.

As a substantial part of our business is in the aerospace industry it was important to right size the business as soon as we could. We readjusted our work patterns and processes throughout the factory.

Although we were fortunate to work across a number of sectors and we had projects to manufacture panels for agri-tech companies and other industrial sectors. Having said that, things are definitely starting to pick up again and we have a number of exciting job opportunities coming up in the weeks and months ahead.

6). What have been your highlights over the last 40 years?

From the very early days we have used Computer Aided Design (CAD) modelling to design products and moulds. A major step forward came when we bought our first CNC 3-axis router which allowed us to machine moulds and complete some basic trimming based on the CAD models. The next big step was when we purchased our first large 5-axis CNC trimming machine. Currently, we have seven CNC trimming/milling machines, the largest of which can trim parts up to 4.8 by 2.4 metres in size.

In 2017 we moved everything under one roof, in our very own workshop in Saintfield, County Down. Prior to this we had been operating from several rented units in a factory estate near Carryduff. Having everything under the one roof has allowed us to streamline the workflow and make our operation much more efficient with the added advantage with room to expand.

7). What has been your proudest moment so far?

My proudest moment was when we finished moving all of our production across to the fully refurbished factory unit.

8). What have been your three key points over the last 40 years?

The first major point of note would be moving into our own factory premises which has plenty of room for expansion. The second would be bringing a strong team around me to help manage the day to day operations and management of the business. Lastly, undertaking a programme to replace all machinery with state-of-the-art equipment which will stand us in great stead going forward.

9). In the future, what would you like Donite Plastics to achieve?

Over the next couple of years, we have plans to develop and productionise the work we have already completed on various parts. We’re also striving to introduce co-operative robots and other innovative technologies into our bonding and assembling processes to make it much more repeatable and reliable. I’m hopeful that Donite Plastics will become an industry leader in this sphere alongside other advanced thermoforming techniques.

10). What would you like Donite Plastics to be remembered for?

11). Where do you see the sector going in the future?

In the future it’s likely that the software installed on vacuum forming machines will continue to evolve. The software on our latest machine is linked to a thermal camera which automatically adjusts the spread of heat across the sheet to allow for changes in ambient temperatures. Processes like this will likely become more commonplace.

There are also interesting possibilities with the development of new 3D printing materials and techniques. In the future, it might be feasible to print vacuum forming tools and trim fixtures which would be revolutionary for the sector.